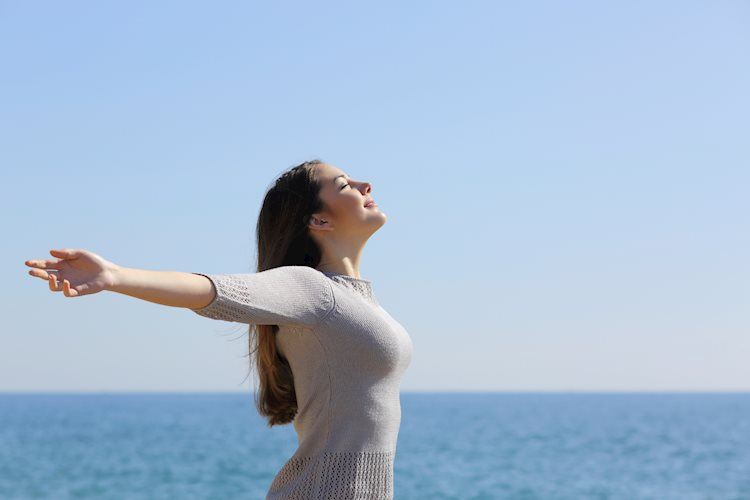 It has finally happened – Gold has staged a convincing break above the $1,800, hitting a high of $1,813.63 at the time of writing. Falling US Treasury yields have prompted investors to buy gold, and cascading stop-losses have also been attributed to the upswing in the price of the precious metal.

How is gold positioned on the technical charts? Examining clusters of support and resistance lines can help provide answers.

The Technical Confluences Detector is pointing to showing that the next resistance line is at around $1,822, which is where the Pivot Point one-week Resistance 3 hits the gold price chart.

The next substantial hurdle for XAU/USD awaits at $1,850, which is the convergence of the 200-day Simple Moving Average and the Pivot Point one-month Resistance 2.

Update: Gold (XAU/USD) is easing from two-day highs of $1796, as sellers continue to lurk near the 100-DMA barrier of $1797. Despite the pullback, the price of gold remains buoyed by notable US dollar supply, as the risk sentiment rebounded on strong German factories data and conciliatory Fedspeak, suggesting that tapering is not on the table anytime soon. Earlier in the Asian session, gold fell to near $1785 levels after China escalated the row with Australia, which spooked markets and boosted the dollar’s haven demand. The focus now shifts towards the US weekly Jobless Claims and Fedspeak for fresh impulse.

Update: Gold price reverses the pullback from intraday high while picking up the bids to $1,790, up 0.15% intraday, ahead of Thursday’s European session. In doing so, the price of gold rises for the second consecutive day as US Treasury yields and the USD are yet to respond to the latest challenges to the risk sentiment.

Among them, Beijing’s dumping of the China-Australia strategic economic dialogue mechanism and pressure on the Japanese government to extend the third state of emergency beyond the May 11 deadline are the key factors that recently weigh on market sentiment. Also, India’s fresh record infections above 400K roil the mood and should have challenged gold buyers. Even so, the stock futures are mildly offered ahead of an important day with full markets and crucial events in the UK as well as Eurozone.

Given the gold trader’s rejection of the risk-off mood, buyers are hopeful to attack the $1,800 threshold one more time.

Gold is extending its range play within a $50 band below $1800 into the fifteenth straight session on Thursday, set to end this week with moderate gains. The bulls are eagerly awaiting the US NFP report for a fresh direction.

The price of gold looks to build onto Wednesday’s rebound, as the US Treasury yields remain subdued amid dovish Fed expectations. Markets seem to have shrugged off Treasury Secretary Janet Yellen’s comments on inflation and a likely rate hike, as they believe that the Fed is unlikely to embark upon the tightening or tapering path anytime soon.

The Fed continues to maintain that they are still distant from achieving their employment goal, with about 8 million Americans still out of job since the pre-pandemic levels.

Yellen said Tuesday, ‘it may be that interest rates will have to rise somewhat to make sure our economy doesn’t overheat.” Her comments spooked markets that led to a global sell-off, lifting the haven demand for the dollar at gold’s expense.

However, later she walked back on her words, which did help to calm markets and cap the gains in the greenback. Gold, thus, attempted a bounce towards $1800 but failed once again near the previous week high of $1790.

Gold prices continue to find support from the recent surge in the precious metals complex, especially with the price of Palladium sitting at record highs above the $3,000 mark. Silver retreated from two-month highs but the undertone continued to remain bullish amid expectations of a faster global economic recovery, which would boost the industrial demand for silver and palladium.

After the US private sector employment rose only by 742K as against expectations of +800K in April, markets turn cautious ahead of the official NFP print. The ADP release is usually seen as a precursor to the US payrolls data. The US economy is likely to have added 978K last month vs. 916K seen previously.

An NFP disappointment could raise doubts on the strength of the US economic recovery, which could push back the Fed’s tapering expectations, rendering gold-supportive. However, the US dollar could see some resurgent haven demand if the broader market sentiment deteriorates on downbeat figures, which could limit gold’s upside attempts.

As observed on gold’s daily chart, the price has been wavering in a familiar range below $1800 since April 16, lacking conviction on either side, as traders seemingly await a strong catalyst for the next directional move.

The range is getting tighter each passing day, with the 100-daily moving average (DMA), now at $1798 continuing to test the bullish commitments.

Meanwhile, the mildly bullish 21-DMA at $1771 keeps protecting the downside.

A daily closing above the 100-DMA barrier is needed to confirm an upside break from the range, which could bring the $1800 mark back into the picture.

Recapturing the latter is critical for the gold bulls to ride higher towards the February 24 high of $1813.

To the downside, if the 21-DMA support is taken out on a sustained basis, a drop towards the 50-DMA at $1744 cannot be ruled out.

All in all, gold’s fate hinges on the US NFP release. In the meantime, the dynamics in the yields and the dollar will continue to influence the prices.

Open interest in Gold futures markets reversed the previous day drop and increased by nearly 1.1K contracts on Wednesday in light of preliminary figures from CME Group. On the opposite direction, volume shrunk by nearly 58.5K contracts after two consecutive daily builds.

Gold prices edged higher on Wednesday and gradually approaches the key $1,800 level. The move was sustained by rising open interest, indicative that the continuation of the uptrend remains in place in the very near-term. That said, the $1,800 mark per ounce troy stays as the next key barrier for gold-bulls. 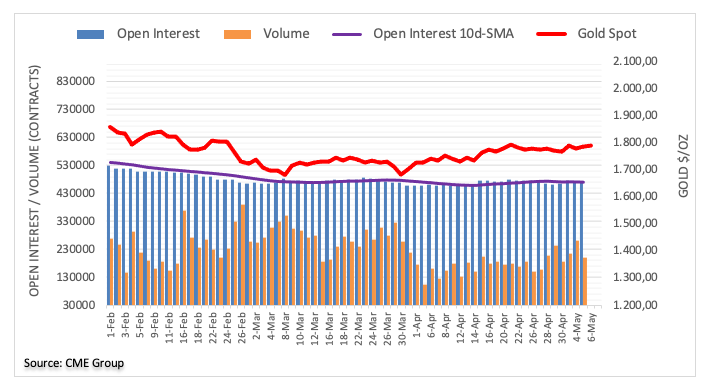 Where are prices heading next? Watch The Commodity Report now, for my latest price forecasts and predictions:

Gold underperformed year-to-date as economic recovery and risk-on sentiment continue. Strategists at HSBC downgrade gold to neutral because they think it will be difficult for the precious metal to rally strongly from current prices amid now higher bond yields.

XAU/USD has been weak as inflation expectations have pushed higher

“Inflation expectations remain elevated but appear to have peaked. We think inflation concerns will be temporary and mild with central banks still committed to keeping loose monetary policy.”

“The US 10 Year Treasury yield appears to have stabilised around 1.6% after hitting recent highs of 1.75% at end-March signaling that inflation concerns may be abating for the time being.”

“Short-term, we have downgraded gold to neutral as we don’t expect significant capital appreciation over the next 3-6 months, especially with bond yields still elevated.”

Deutsche sees EUR/USD moving towards 1.10, likely reaching 1.15 by late 2023
Singapore’s PropertyGuru slips back into the red with $5.3 million net loss for the third quarter
It’s time for crypto fans to stop supporting cults of personality
NZDUSD corrects lower after sniffing the 200 day MA
Taking down crypto influencers is one step that would help to heal the market