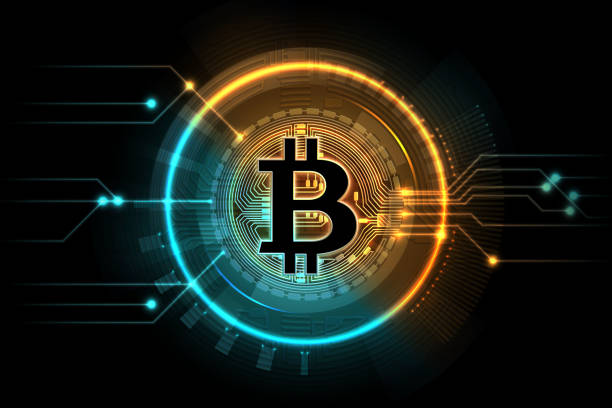 While Fed minutes started to prepare the markets for discussion on tapering in the coming months, Dollar wasn’t give much support. It has indeed ended as one of the worst performers for the week, just next too New Zealand and Australian Dollar. On the other hand, Swiss Franc and Yen ended as the strongest ones.

While the development in currency markets might suggest risk aversion, it’s not much seen in other markets indeed. Major global stock indexes, US, Europe and Asia, ended nearly flat. Gold edged up mildly while oil price was just slightly lower. The main risk selloff was only seen in some commodities and crypto-currencies

Overall, we’d argue that the strength in Swiss Franc is not solid enough yet while Aussie was not totally weak. Dollar could extend lower for the near term but strong support might be not too far away. Overall, directions are generally unclear.

Bitcoin to draw support from 27k-30k after crash

Crypto currencies were the major focuses in rather dull markets last week. In particular, bitcoin’s crashed to as low as 29563, before settling at 35340. Just a few weeks ago, it hit record high at 64828. While the free fall was much deeper and fast than originally expected, we’d hold on to the view that downside potential is limited in the short term. 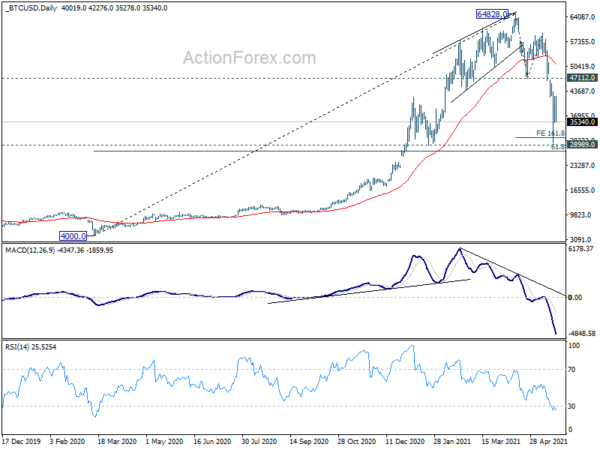 Swiss Franc not clearly bullish yet despite closing higher

However, sustained break of 1.0903/15, as well as the channel support, will indicate downside acceleration. More importantly, that would mark the completion of the whole rise from 1.0505, and bring deeper fall to next cluster support zone at 1.0737 support zone (61.8% retracement at 1.0751). 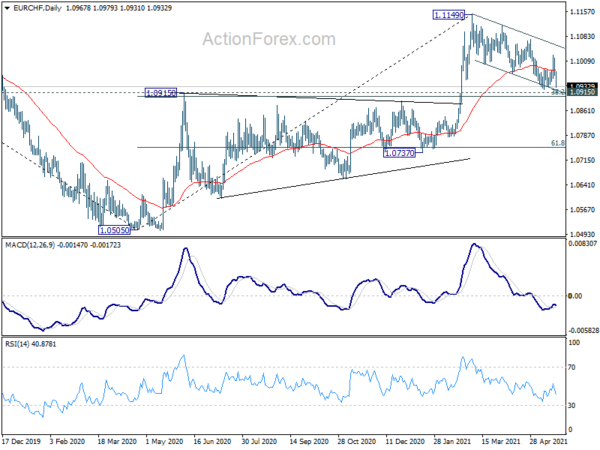 However, downside acceleration in EUR/CHF could also drag GBP/CHF through 1.2579 support. In that case, decline from 1.3070 could resume to 1.2259 key resistance turned support. 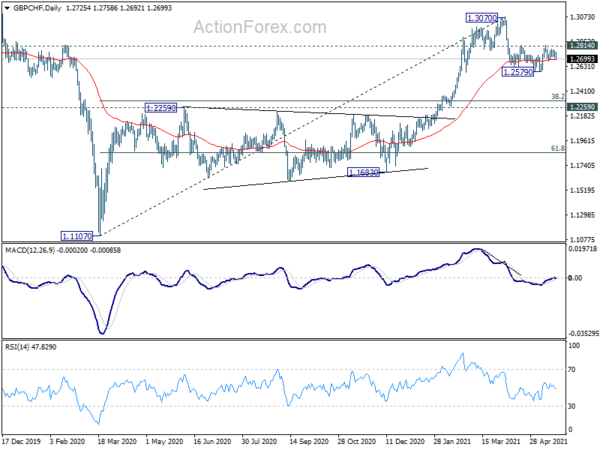 In that case, we might also see USD/CHF re-accelerate downward towards 0.8576 low. 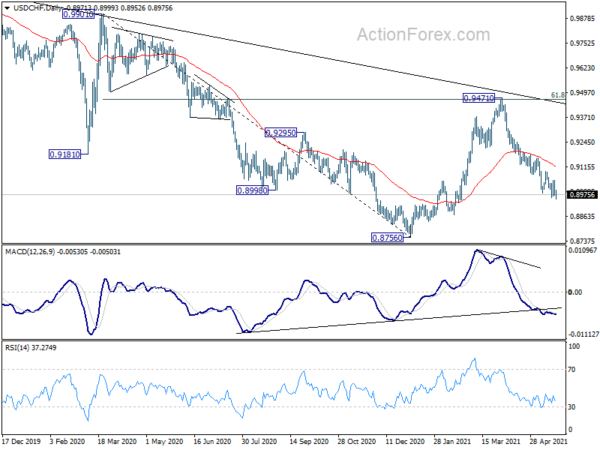 Aussie not yet bearish despite closing the week lower 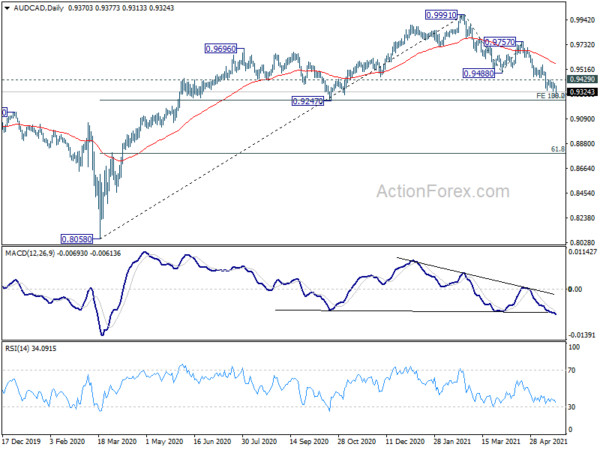 While EUR/AUD spiraled up last week, there is no change in the view that it’s just extending the consolidation pattern from 1.5250. The is affirmed by the near term corrective price actions too. We’re expecting strong resistance from 38.2% retracement of 1.6827 to 1.5250 at 1.5852 to limit upside to bring down trend resumption. 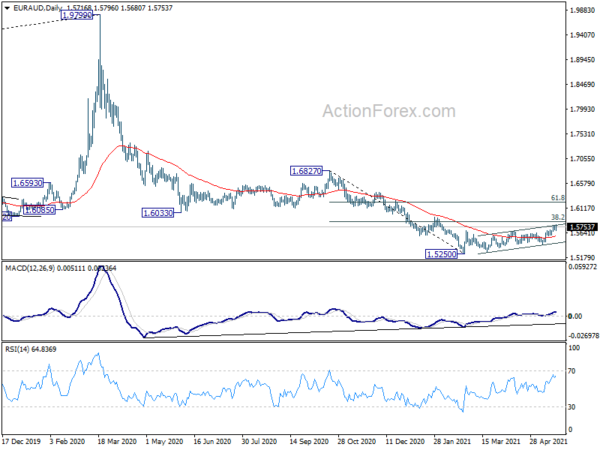 AUD/USD was also just stuck in range below 0.7890 last week despite further loss of upside momentum. It’s also trying to draw support from 55 day EMA (now at 0.7726). Rise from 0.7530 is still mildly to extend to retest 0.8006 high, and then resume larger up trend from 0.5506. However, break of 0.7673 support would probably extend the corrective pattern from 0.8006 with another falling leg through 0.7530 support. That could give additional pressure to the Aussie elsewhere, like against CAD and EUR, and turn the outlook more bearish in broad based term. 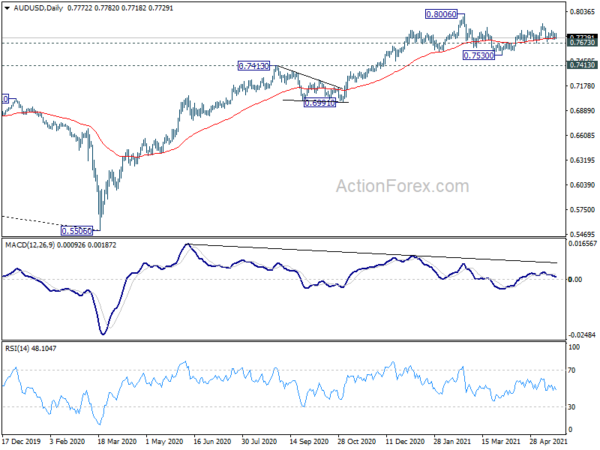 Talking about Dollar, the Dollar index edged lower last week but downside momentum was apparently rather weak. The development is favoring the case that fall from 93.43 is merely the second leg of the corrective pattern from 89.20. That is, while further decline cannot be ruled out, downside should be contained by 89.20, without sustained break, to bring rebound. Break of 90.90 resistance will start the third leg back towards 93.43 resistance. If that’s the case, we should see a firm break of 1.2348 high in EUR/USD. Let’s see how it goes. 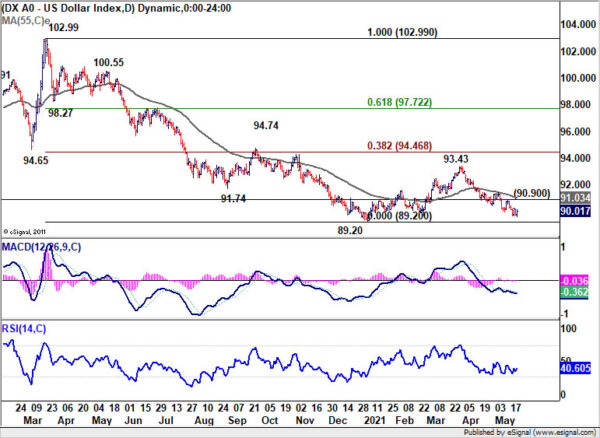 GBP/JPY edged higher to 154.80 last week but continued to lost momentum from there. Though, there was no deep correction yet. Initial bias remains neutral this week first and further rise is expected. On the upside, break of 154.80 will resume larger up trend to 156.59 key resistance first. Break will carry larger bullish implication and target 61.8% projection of 133.03 to 153.39 from 149.03 at 161.61. For now, outlook will stay bullish as long as 149.03 resistance holds, in case of pull back. 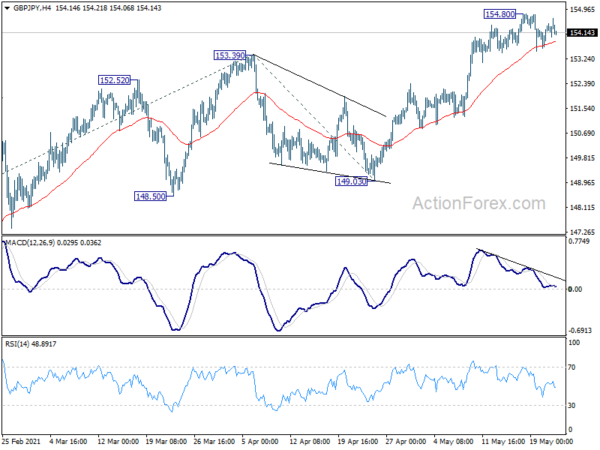 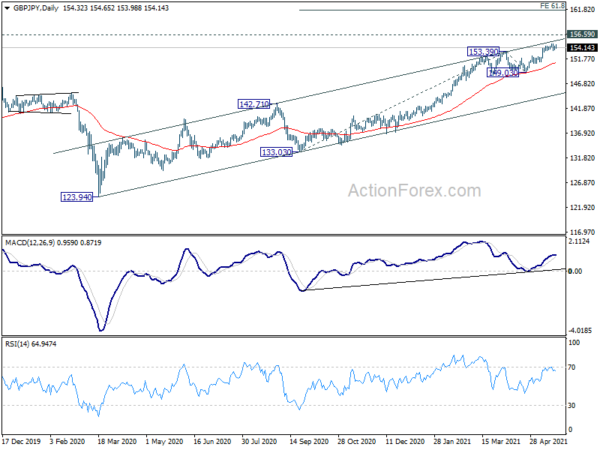 In the longer term picture, the strong break of 55 months EMA was an early sign of long term bullish reversal. Firm break of 156.69 resistance should now confirm the start of an up trend for 195.86 (2015 high). 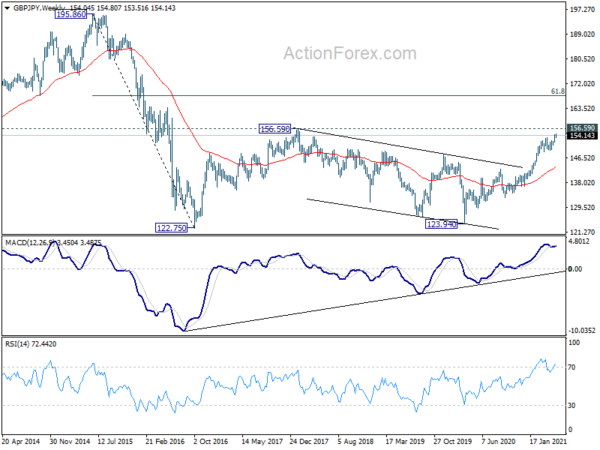 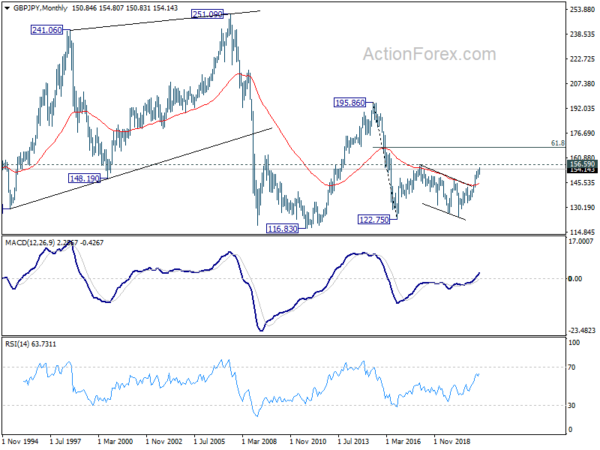