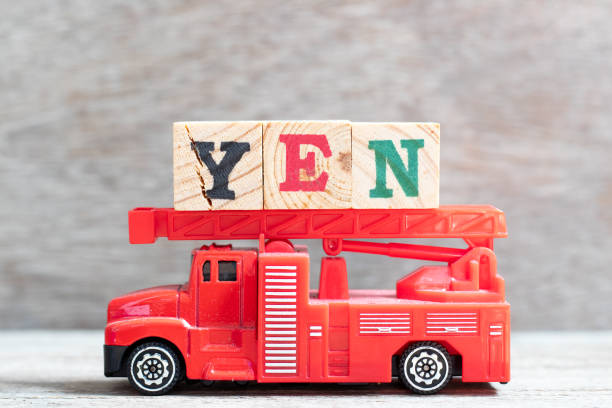 The financial markets continue to be relatively mixed entering into US session. Aussie and Kiwi are currently the strongest one, together with Yen. On the other hand, Dollar and Euro are the weakest ones, together with Loonie. European indexes are trading mildly higher but upside is limited. Gold and oil are also struggling in tight range.

Technically, USD/JPY’s breach of 109.32 support is a sign of Dollar weakness, or Yen strength, or both. We’ll now see if it could accelerate further lower to 108.55 support. We’d also keep an eye on when Gold would break through 1895.94 to extend the rebound from 1855.30 to retest 1916.30 high. In that case, we might see renewed selling in the greenback elsewhere. 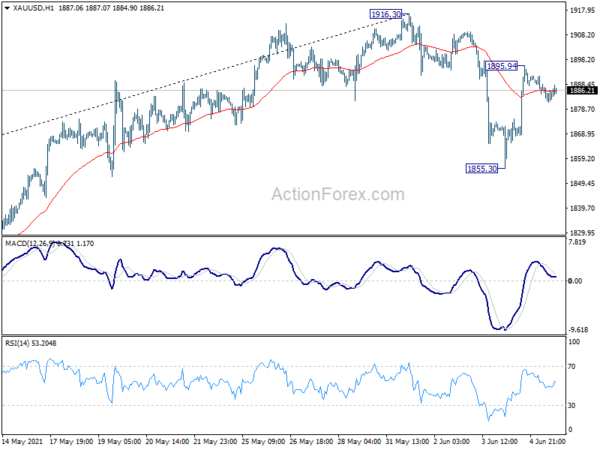 BoE published a discussion paper on central bank digital currency today. Governor Andrew Bailey said in the release, “we live in an increasingly digitalized world where the way we make payments and use money is changing rapidly.”

“The prospect of stablecoins as a means of payment and the emerging propositions of CBDC have generated a host of issues that central banks, governments, and society as a whole, need to carefully consider and address. It is essential that we ask the difficult and pertinent questions when it comes to the future of these new forms of digital money,” he added.

Eurozone Sentix Investor Sentiment rose to 28.1 in June, up from 21.0, above expectation of 26.0. That’s the fourth increase in a row , and the highest reading since February 2018. Current situation index rose from 6.3 to 21.3, fourth increase in a row, and highest since November 2018. Expectations index dropped slightly from record high of 36.8 to 35.3.

Sentix said: “The eurozone is increasingly leaving the painful losses of the Corona year behind… The positive economic situation is not likely to end any time soon…. However, there is a downside to the strong economy and that is foreseeable rising prices”.

It added, “Experience shows that institutions such as central banks are often “behind the curve” at key turning points. This means that the pressure on prices, and thus also on the bond markets, is likely to continue over the summer. The ECB will probably not be able to avoid the discussion about turning away from its very expansionary policy for much longer.”

Also released, Germany factory orders dropped -0.2% mom in April, versus expectation of 0.4% mom. Swiss unemployment rate dropped 0.1 to 3.1%. Swiss CPI rose to 0.6% yoy in May, up from 0.3% yoy, matched expectations. Swiss foreign currency reserves dropped from CHF 914B to CHF 902B in May.

Australia AiG Performance of Services Index rose 0.2 pts to 61.2 in May. That’s the highest monthly result since October 2003, indicating a stronger expansion. Four of the five services sectors indicated expansion while the other was broadly stable. Four of the five activity indicators, sales, ne orders, employment and deliveries, showed positive results.

Ai Group Chief Executive, Innes Willox, said: “Australia’s services sector maintained its momentum in May…. With existing capacity well utilised, and with reports of labour shortages becoming more common, conditions were in place for a substantial lift in investment in the sector.”

USD/JPY’s break of 109.32 minor support suggests that corrective rise from 107.47 has completed at 110.32. Intraday bias is back on the downside for 108.55 support first. Break there should indicate that pattern from 110.95 has started the first leg already. Deeper fall would be seen to 107.47 support next. For now, risk will stay mildly on the downside as long as 110.32 holds, in case of recovery. 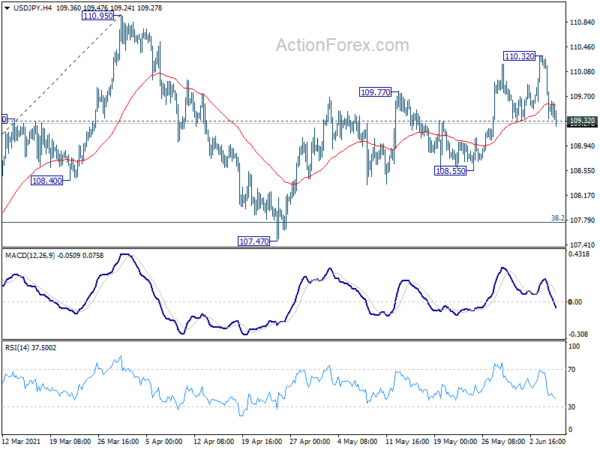 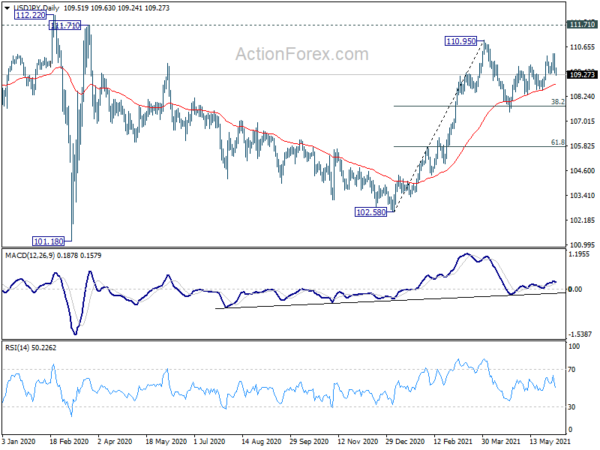