Silver stalled the previous day’s retracement slide from two-week tops and attracted some dip-buying on the last trading day of the week. The commodity held on to its modest gains through the first half of the European session and was last seen hovering near the $26.10-15 region.

From a technical perspective, the XAG/USD, for now, seems to have formed a strong base near 200-hour SMA, which should now act as a key pivotal point for short-term traders. Given that the overnight positive move struggle to find acceptance above the $26.30 supply zone, the bias still seems tilted in favour of bearish traders.

That said, the XAG/USD has been showing resilience below the $25.70 confluence support, comprising of the very important 200-day SMA and the 61.8% Fibonacci level of the $23.78-$28.75 move up. This makes it prudent to wait for some follow-through selling below the mentioned region before positioning for any further depreciating move.

Meanwhile, technical indicators on the daily chart – though have been recovering from the negative territory – are yet to confirm a bullish bias. This adds credence to the near-term negative bias. Hence, any subsequent positive move back towards the mentioned confluence region might still be seen as a selling opportunity.

On the flip side, any meaningful pullback below the $26.00-$25.95 region (200-hour SMA) might continue to find decent support near the $25.70 region ahead of weekly swing lows, around mid-$25.00s. Sustained weakness below might turn the XAG/USD vulnerable and pave the way for a fall towards challenging the key $25.00 psychological mark. 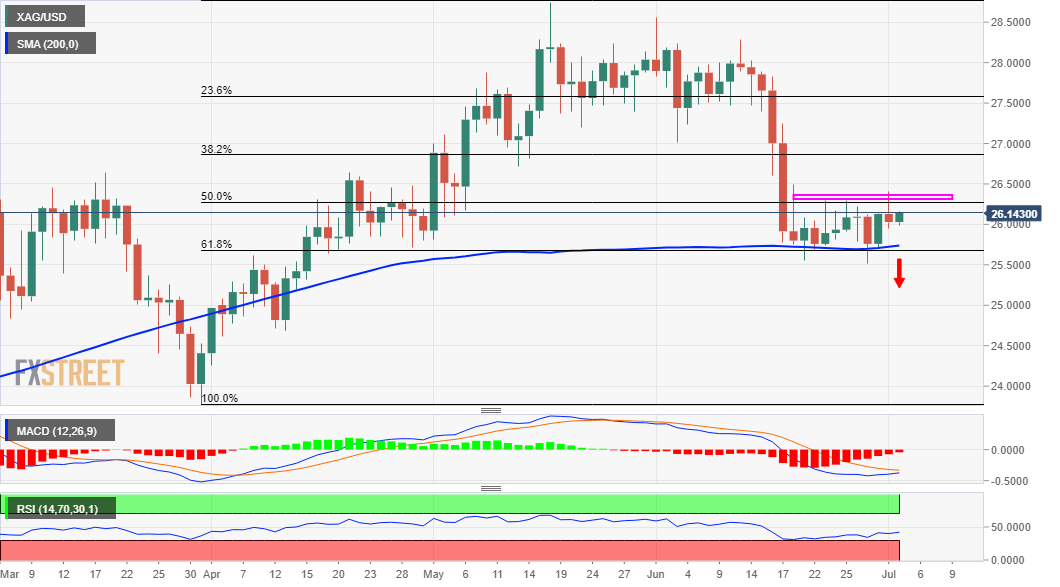 USD ticks higher as the day works toward the close
Decentralized finance faces multiple barriers to mainstream adoption
Oil prices extend losses on demand worries
EASY Forex Trading Strategy : How To Catch 100 pips A day?
US 10 year yield moves to a new high for the week