The CAD is the strongest

The USD is now the weakest of the major currencies.  The CAD remains the strongest.

The greenback is trading to new session lows verse the GBP, CHF, CAD, AUD and NZD. The pair is just off it’s session low vs the JPY. The EUR and USD are battling it out for the weakest of the major currencies.

Below are the percentage changes of the major currencies verse the US dollar. The dollar is down -0.76% versus the Canadian dollar. It is near unchanged verse the EUR. 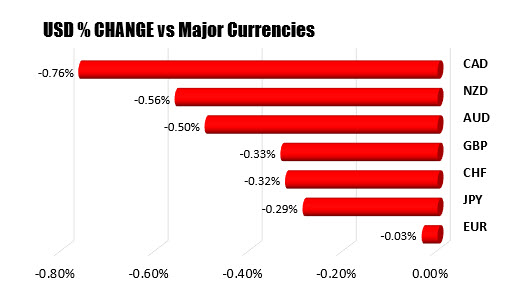 GBPUSD: The GBPUSD is moving closer to its 200 hour moving average at 1.38198 (and moving lower). The price of the pair has not had a closing hour above its 200 day moving average since June 25 (last Friday). There was only one hourly bar that traded above the moving average (on Monday), but that break was quickly rejected.

USDCHF: The USDCHF is trading down to test a swing area at 0.92127 and below that the 50% retracement of the move up from the June 25 low and its 200 hour moving average at 0.9206.  Moving below that support would tilt the bias more to the downside.  Earlier today, the 100 hour moving average was broken but momentum on the break slowed.  However the last two hourly bars have been able to stay below its 100 hour moving average, and sellers are starting to push lower as a result.
This article was originally published by Forexlive.com. Read the original article here.
Share on Facebook
Share on Twitter
Share on Pinterest
Share on LinkedIn