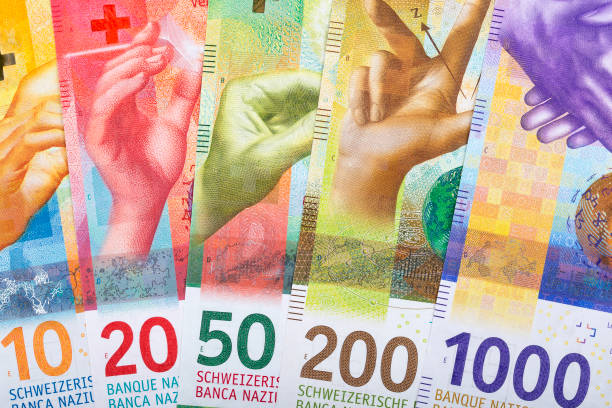 Dollar is under some pressure as falling treasury yield is weighing down the greenback. Canadian Dollar is even weaker as WTI oil price breaches 70 handle again. New Zealand and Australian Dollars are the stronger ones but gains are limited. The post RBA lift on Aussie is so far short-lived. Swiss Franc is actually taking the spotlight, extending near term rise against both Dollar and Euro.

Technically, as USD/CHF is extending the fall from 0.9273, eyes is now on 109.05 support in USD/JPY. Break will resume the decline from 111.65. If that happens, we’d then pay attention to whether it’s accompanied by break of 1.1907 resistance in EUR/USD, which signals Dollar selling. Or GBP/JPY would break of 151.59 minor support, which signals Yen buying.

St. Louis Fed President James Bullard told Reuters that current inflation, which is well over Fed’s target, is at levels which former chairs like Alan Greenspan would have “immediately tried to quash.” He called for swift action on ending the asset purchase program. “We are not being that preemptive. Our models say this will settle down, but in the meantime it will be pretty volatile,” he said, “what I want to be prepared for and get the committee prepared for is the risk that this is an unpredictable situation.”

Bullard also said a new “regime” may have arrived and “monetary policy needs to be more nimble.” The global equilibrium was upset by the pandemic, and “the reverberations will continue, and you will have a lot more volatility than you are used to.”

“We will have long, lingering effects as the rest of the world recovers. You have shortages and bottlenecks everywhere. You have Europe likely to grow more quickly in coming quarters,” Bullard said. “You have industries still adjusting to the post-pandemic world – many things happening, and at a pace we are not used to.”

Swiss consumer climate surged to 8 in Q2, highest since 2010

Swiss SECO Consumer Climate rose sharply from -7 to 8 in Q3. That’s the highest level since July 2010, and well above long-term average of -5. Expectations of general economic growth rose to record 48. Employment expectations rose to 29, just slightly below pre-crisis level. Expected financial situation also rose to 3, back above long-term average for the first time in over six years.

RBA maintained cash rate target unchanged at 0.10%. Also, target for April 2024 government bond yield was also kept at 0.10%. More importantly, it maintained the tapering plan unchanged. Weekly purchases will be lowered from AUD 5B to AUD 4B starting early September, until at least mid-November.

RBA also pledged to “maintain its flexible approach to the rate of bond purchases”. The conditions for rate hike is not expected to be met before 2024.

The central bank said the outlook for the coming months is “uncertain” and depends up on the “evolution of the health situation and the containment measures”. Then, the central scenario is for the economy to grow by “a little over 4 per cent over 2022 and around 2½ per cent over 2023.”

USD/CHF’s fall continues today and reaches as low as 0.9021 so far. Intraday bias stays on the downside for retesting 0.8925 low. On the upside, break of 0.9074 minor resistance will turn intraday bias neutral first. But another fall will remain in favor as long as 55 day EMA (now at 0.9126) holds. 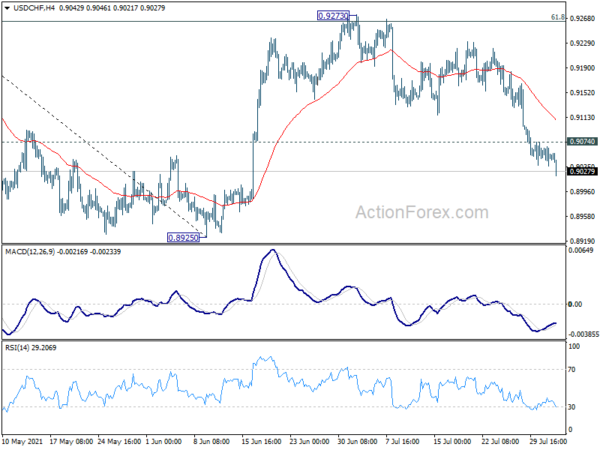 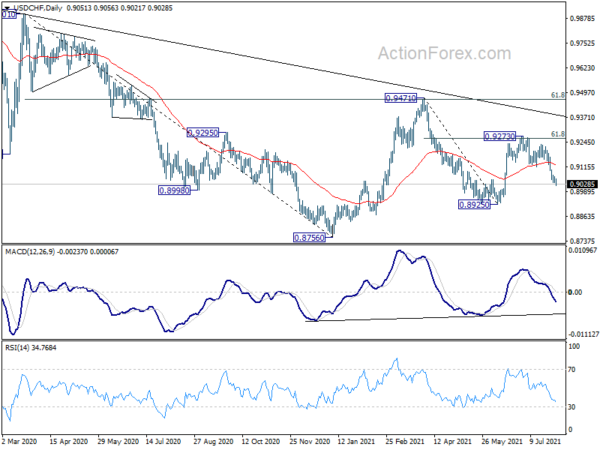